GOATCRAFT was born in 2010 as a vision of frustration. Disappointed by a stagnating metal scene incapable of renewing its original spirit and sheer power, sole member Lonegoat decided to go with a less obvious approach to the dark concepts that metal has always been soaked in. With GOATCRAFT he has translated the black and death metal vocabularies into a neo-classical musical language that rivals with them in terms of sonic intensity and depth. The typical metal instruments have been replaced with heavy keyboards; its fast riffs and primitive aggressiveness with tempestuous piano fugues; its brutality with elegant yet anguishing, foreboding melodies. Appropriately baptized by Lonegoat himself as ‘Necroclassical’, GOATCRAFT’s style has been perfected through the band’s previous releases: the “All For Naught” debut from 2013, and 2014’s acclaimed opus “The Blasphemer,” a concept album themed around the works of the famous English painter and poet William Blake.
Now GOATCRAFT is back with a new album, “Yersinia Pestis”, featuring 10 new original recordings that offer a more convincing blend of classical music and dark ambient. Far from being simply the tale of those sad days when the Black Plague scattered death and disease over Europe, “Yersinia Pestis” is above all an observation on the caducity of life and the misery of humankind. “Looking back to other great catastrophes, we can conclude that nature and man are intertwined in a dance of death,” explains Lonegoat. “Every so often the world puts us back into our places by killing us off. Our frail flesh is no match against the elements in which we reside. Humanity recoils.”

Written and performed by Lonegoat. 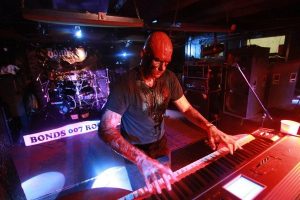